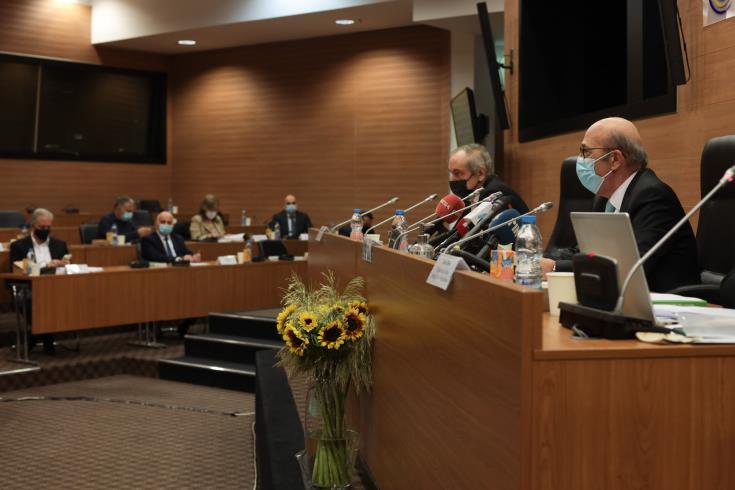 Cyprus House of Representatives President Adamos Adamou presented on Wednesday the parliamentary annual report, noting that despite the obstacles the Covid-19 pandemic posed the work achieved was substantial.

Addressing a press conference on the matter Adamou said that raising awareness on the work done by parliament contributes in the communication between the people and its representatives, shapes a well-informed public opinion and enhances efforts for a participative democracy.

This year’s report, he noted, presents the multifaceted and substantial work of the House of Representatives during this period, despite the unprecedented difficult conditions in which the parliament had to operate due to the coronavirus pandemic. To that effect he referred to consultations of parliamentary committees by teleconference at the beginning of the pandemic and the fact that the plenary would be convened only for legislative work regarding protecting public health and in support of the economy with the participation of one third of its members.

During the past year, the parliament voted 175 bills, 52 legislative proposals tabled by MPs, and approved 75 regulations.

Cyprus President Nicos Anastasiades referred back to Parliament 25 legislations and 2 decisions taken by Parliament and sought recourse to the Supreme Court on 3 laws voted by the House of Representatives. Parliament also voted on 3 constitutional amendments.

In the context of parliamentary scrutiny of the executive MPs submitted 607 questions while 600 replies were received, 210 of which concerned questions submitted previously.

Among other things the Parliament continued its work on the harmonisation of national legislation with the acquis communautaire and to follow the decision-making procedure at EU level.

The House of Representatives was very active and productive in the area of parliamentary diplomacy, with the Cyprus problem being the main pillar of its international activity as well as showcasing at every possible opportunity Cyprus’ role as a pillar of security and stability and as a bridge of dialogue between Europe and the wider region.

The Parliament’s President and its Members also denounced Turkey’s illegal activities in the fenced-part of Famagusta, known as Varosha and the Republic of Cyprus’ Exclusive Economic Zone (EEZ) as well as of the illegal transport of illegal immigrants from Turkey to the areas controlled by the Republic via the Turkish occupied areas of the island. The need for Turkey to implement its contractual obligations and European Court of Human Rights’ rulings on missing persons and refugees was also stressed.

Cyprus has been divided since 1974, when Turkey invaded and occupied its northern third. The latest UN backed round of talks took place in the Swiss resort of Crans Montana but failed to yield any results. 26/01
Central Bank opens the way for liquidation of former Laiki bank
27/01
Petroleum product sales drop by 19% in 2020, amid the Covid-19 crisis
27/01
Shops, malls, hair and beauty parlours reopen
27/01
Μeasures at airports and for flights in place until March 1st