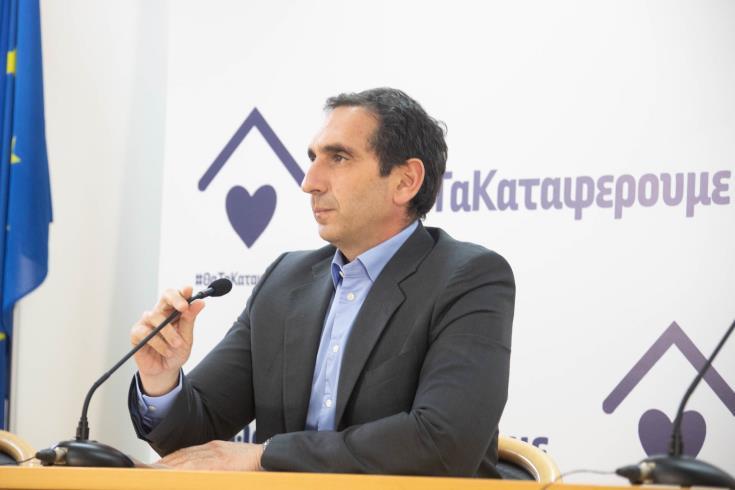 Cyprus Health Minister Constantinos Ioannou announced on Monday a further tightening of measures restricting the free movement of people in a bid to contain the COVID-19 outbreak in the country.

Speaking during a press conference at the Ministry of Health, Ioannou said that he would issue a new decree which would restrict from 0600 hours local time on Tuesday people gathering in any residence apart from the ones who are permanently residing in it.

He announced a curfew between 2100 hours and 0600 every day applicable to everyone apart people who have the necessary documentation on them certifying that they are working.

"Using the exceptional movement clause in accordance with the provisions of document B, is limited to once per day after sending an sms to 8998 and getting permission," he said.

He clarified that only citizens aged 65 and over will be able to use hard copies of document B, which could until now be used by everyone, instead of sending an sms.

The Health Minister also announced that all retail businesses selling food and beverages such as supermarkets, general stores, butchers, fishmongers, bakeries, patisseries, greengrocers, off-licences, mini markets, will remain shut on Sundays. He clarified that such businesses can offer a delivery service if they so wish.

Passengers in a taxi or a car cannot exceed three at any time including the driver.

Ioannou said that the owners of businesses should place signs both within and outside their premises, so that a distance of two meters between customers can be maintained.

All citizens approaching premises which are accessed by the public should make sure to keep a distance of two meters from other people, he added.

He further announced that a ministerial committee which convened earlier today decided to increase the fine imposed for violation of the decree from €150 to €300, to step up controls in the crossing points to the Turkish occupied areas and to make use of neighbourhood watch members.

Commercial banks will be advised to issue credit cards to beneficiaries on the basis of their deposits and to take measures of protecting their customers who make cash withdrawals from ATMs, he added.

The Ministry, he noted, is studying the possibility of imposing electronic tagging to people who have tested positive of the coronavirus and are in self-isolation. Replying to a question as to how this would happen, he said that it would be similar to an electronic bracelet used for prisoners in house arrest.

Ioannou said that the increased number of positive cases announced yesterday had to do with two people who had arrived from abroad, did not present with symptoms and had been told to self-isolate, but who instead had been out and about, had been in touch with a number of people and had later been confirmed as having contracted COVID-19 and "have contaminated some people due to their irresponsible actions."

Asked what would happen if people need to visit pharmacies at night he said he believes it would be Ok for citizens to do so, adding that this should be clarified.

Asked how residences will be checked he said that checks would take place from the police and the neighbourhood watch members. He reiterated however that no matter what measures are put in place if people do not realise the need to adopt them then neither the police nor anyone else would be able to fully monitor their implementation. We all need to realise (the necessity) and implement these measures, he said.

Only those who travelled for treatment and students belonging to vulnerable groups allowed in Cyprus without COVID-19 certificate.

Ioannou also informed that a decree will be issued today which will provide that only people who had travelled abroad to receive medical treatment and their escorts as well as students who belong to vulnerable groups of people as has already been provided in a previous Health Ministry decision of March 16, would be allowed to enter the Republic of Cyprus without a COVID-19 medical certificate.

People who had travelled abroad for medical reasons will have to show a certificated granted to them by the Republic`s diplomatic missions abroad.

Students who belong to vulnerable groups of people will have to show a special certificate, issued only after their medical certificates are reviewed by a three-member medical council, he clarified. Applications should be made to the Cyprus Medical Association at [email protected].

If needed, the government would charter special flights from Athens and London for people who fall under the above categories to be able to return to Cyprus, he added.

Everyone who enters the Republic of Cyprus, he said, would have to remain in areas of obligatory quarantine determined by the government for a duration of 14 days, apart from people who are abroad for medical reasons who will be placed under self -isolation in order to continue their treatment.

Everyone entering the Republic of Cyprus will be submitted to an obligatory test for COVID-19 and the relevant protocols will be followed, he added.

Ioannou also referred to the government’s effort to protect public hospitals and medical health professionals, stressing that "we are doing everything we can" and that planning is in place and will be amended depending on developments.

"It is important for everyone to realise that no hospital, in no country, is able to respond to mass cases," he stressed.

He explained that according to the measures in place, citizens who do not feel well should contact their personal doctor who would then refer them to the public health clinics, two of which are operational in every city. Until patients test positive or not, they are kept in short-term hospitalisation units in order to rule out the virus from spreading in the hospitals.

Ioannou said more announcements would be made on Tuesday by the relevant authorities on the plan of action.

He expressed his thanks and gratitude to medical professionals and assured them that as Minister of Health "I will personally stand by their side, together with them and we will not leave them unprotected."