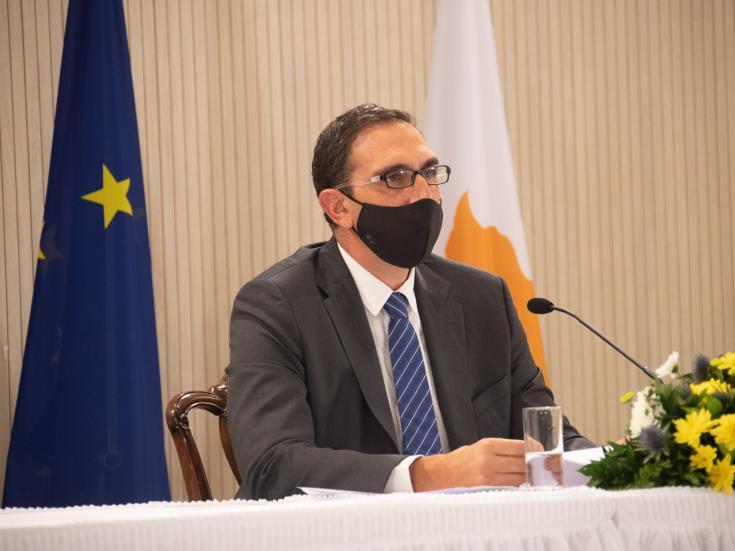 First and second grade Lyceum students in Cyprus return to class on Monday, while gyms, dance schools and other indoors sports centres, including swimming pools resume operations.  A ban in visits to homes for the elderly, training of teams and matches of all team sports in C Category is also lifted. Restaurants are set to open on March 16.

Minister of Health Constantinos Ioannou announced the Cabinet’s decisions on the gradual easing of measures to contain the pandemic in a press conference, on Thursday. He stressed that the vaccine is the only weapon at our disposal in order to overcome the health crisis as soon as possible, adding that a delay in vaccination in all countries would allow variant strains to appear which would in turn mean an increase in hospitalisations and deaths.

“We find ourselves again in a race against time,” Ioannou said, adding that the measures of social distancing and personal protection are "our only ammunition until the necessary percentage of vaccination coverage is reached."

According to Ioannou, from March 1st the first and second grade students of public and private lyceums and technical schools will return to class, conservatories, private lessons institutes, educational centres and other evening activities will be allowed with the physical presence of up to two people, including the teacher. Visual arts spaces and galleries also open their doors in line with Health Ministry guidelines and protocol, gyms dance schools and other indoor sports centres, including swimming pools will also open on Monday, on the basis of directives and a protocol which will be issued by the Cyprus Sports Organisation (CSO).

He added that, as of Monday, March 8, the Cabinet decided that all public and private high school students will return to class.

He noted that the measures will be regulated by Decree and that more clarifications will be given later today.

The Minister of Health also said that on the basis of planning it is expected, among other measures, that from Tuesday, March 16, restaurants will resume operations on the basis of a special protocol which is being drafted by the steering committee.  More details are expected to be announced next week.

Ioannou expressed the view that the end is close, noting that “victory in this final battle will come with vaccination coverage.”

“We are moving forward with steady and cautious steps. We wish that the restart we are attempting will be successful and I am certain that this is the wish of society as a whole.”

He urged citizens to join forces in this final effort to prevent the virus and to continue to act responsibly to be a little more patient.

The common goal, he noted, is protecting the health of every citizen so that in the end everyone can be healthy.

The Minister of Health also said that the Cabinet remains steadfast in the position that the easing of measures should be done slowly, cautiously and in a controlled fashion, adding that the epidemiological situation of the last two weeks, was reviewed including the number of cases, the positivity rate, the cumulative impact, the situation in the hospitals and the death count.

He said that the data show a stabilisation of the number of cases in the last 14 days, with a small increase in the last two days and that the positivity rate is close to 0.5% with small fluctuations.

The cumulative incidence across Cyprus continues to be over the safe level set out by the ECDC that is to say 164.3 per 100,000 residents, recording a small drop compared to the previous 15 days.

All districts, apart from Limassol where there are more cases, although improved the situation remains at a critical level and could easily deteriorate.

He said "the government is concerned about the situation in Limassol," adding however no additional measures would be taken for the time being for the district. Instead, it has been decided to increase testing sites and urge people to be tested in order to detect possible clusters of the virus. He also noted that checks to see whether people are conforming withe measures in place in the district would be intensified.

Referring to the situation in hospitals, Ioannou said it is manageable but could get out of control, noting that the number of Covid-19 patients has recorded a small drop and the goal is for this to continue in the coming days.

The Minister of Health also announced that 260 unemployed people would be hired to help in the effort to oversee the successful implementation of measures and health protocols.

Our goal, he pointed out, is not to impose fines but to help businesses find the way to implement protocols correctly and effectively in order for them to operate safely and for the protection of their employees’ health.

Ioannou also informed that in the first three weeks of February “over 600,000 rapid antigen tests were carried out which helped give a picture on the situation within the community in real time.”

He also said that vaccinations are going in accordance to plans. “We have achieved a very important goal we had set, having vaccinated 70% of people aged 80 and over, while continuing to increase the vaccination rate for people aged 70 and over,” he noted.

March, he stressed will be a month of critical importance, since over 160,000 vaccine doses are expected to be delivered in Cyprus which will in turn translate in covering vulnerable groups of people at the same time as vaccinating every age group.