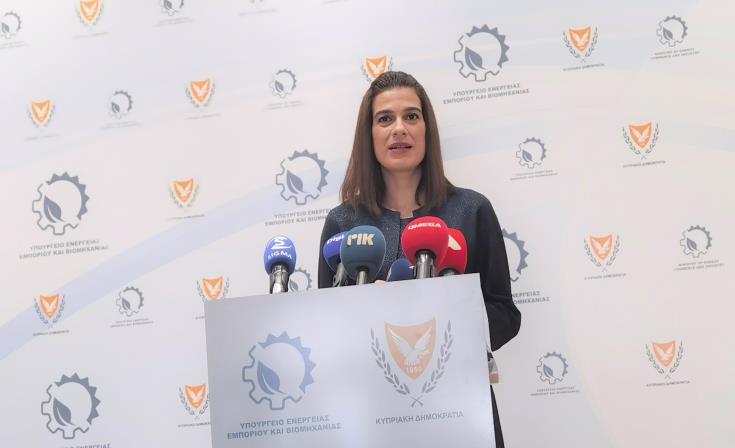 Cyprus Minister of Energy, Commerce and Industry, Natasa Pilides, has announced a 10% discount on electricity bills for the months November-December 2021 and January-February 2022, as well as renewable energy schemes aimed at long term savings for businesses and households, as compensatory measures to the increase in electricity price.

Speaking during a press onference, Pilides said that the series of compensatory measures were decided after consultations amongthe Ministries of Energy and Finance, the Cyprus Energy Regulatory Authority (RAEK) and the Cyprus Electricity Authority (EAC) and after a meeting with the President of the Republic, Nicos Anastasiadis, who gave the guidelines for the drafting of the measures.

Pilides analyzed the seven measures decided, starting with the absorption by the EAC part of the cost of the increase in electricity caused by rising fuel prices and the cost of emissions. The reduction of 10% on electricity bills will cover the months November - December 2021 and January - February 2022.

The Minister pointed out that the government will also adopt a series of measures to provide consumers with the means of reducing the cost of power permanently.

As she said, among those measures is the changing of the Aid Plan for the installation of a virtual net-metering for consumers who cannot, due to technical constraints and limited space, install photovoltaic systems on the roofs of their buildings. In addition, the government will financially help vulnerable groups to replace their electro-intensive electronic devices. She said that the ministry is also processing a RES scheme for farmers that will be announced early next year.

Pilides noted that the government will also be announcing subsidies for large commercial projects that will include power production and storage. She added that the EAC will be looking into buying emission early in the year when they are cheaper and selling any surplus later on.