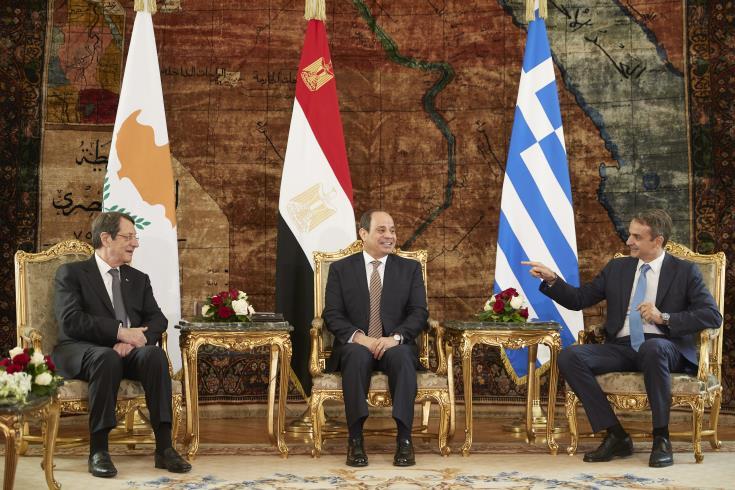 The leaders of Greece, Cyprus and Egypt have called on Turkey to abstain, in a consistent and sincere manner, from provocations and unilateral actions in breach of international law.

Moreover they have reaffirmed their strong support to a just, comprehensive and viable settlement of the Cyprus problem, in line with the relevant United Nations Security Council resolutions that call for a bizonal, bicommunal federation with a single sovereignty, a single international personality and a single citizenship as well as in accordance with the EU acquis, values and principles.

A Joint Declaratoin issued after the 9th Greece-Cyprus-Egypt Trilateral Summit, that was held in Athens on Tuesday, said, among others, that Kyriakos Mitsotakis, Prime Minister of the Hellenic Republic, Nicos Anastasiades, President of the Republic of Cyprus and Abdel Fattah El - Sisi, President of the Arab Republic of Egypt, "underlined the importance of the respect of the sovereignty and sovereign rights of all states in their maritime zones in accordance with international law, as reflected in the UN Convention on the Law of the Sea (UNCLOS)."

"In this context, we condemned the illegal drilling and seismic operations by Turkish vessels in Cyprus EEZ/continental shelf, in maritime areas already delimited in accordance with international law. We also reiterated our condemnation of the continuous violations of Greek national airspace and territorial waters in the Aegean Sea and all other illegal activities in areas falling within Greece’s continental shelf, in contravention of international law," the Joint Declaration added.

Hence, the leaders said, "we called on Turkey to abstain, in a consistent and sincere manner, from provocations and unilateral actions in breach of international law, including from harassment of survey vessels duly licensed by Greece or Cyprus, thus helping to create conditions conducive to dialogue.  We stressed that productive and result-oriented dialogue cannot be conducted in an aggressive environment or under the threat of the use of force."

The three leaders noted that they discussed the Cyprus issue and "we reaffirmed our strong support to a just, comprehensive and viable settlement in line with the relevant United Nations Security Council Resolutions that call for a bizonal, bicommunal federation with a single sovereignty, a single international personality and a single citizenship as well as in accordance with the EU acquis, values and principles. Regarding Varosha, we recalled the Security Council Presidential Statement of 23 July 2021, which reaffirmed the status of Varosha as set out in previous United Nations Security Council Resolutions, including Resolutions 550 (1984) and 789 (1992)," they noted.

According to the Joint Declaration, the three leaders "underlined the need to resume negotiations from where they were left off and expressed our support for the appointment of a Special Adviser of the United Nations Secretary General with the mandate to engage with all involved, in order to resume the negotiating process. We also stressed that an agreed, comprehensive and viable Cyprus settlement will not only benefit the people of Cyprus, both Greek Cypriots and Turkish Cypriots, but will also significantly contribute to peace and stability in the broader region," they said.

Moreover, they "welcomed the signing of the agreement for the establishment of a trilateral electricity interconnector between the grids of Egypt, Cyprus and Greece."

This project, they noted, "strengthens our economic cooperation and enhances the security of energy supply, not only of the countries involved, but also of Europe, as it will create a highway for the transmission of significant amounts of electricity to and from the Eastern Mediterranean."

"The Electricity Interconnector project, which connects the electricity grids of our countries, constitutes an important component of the strategy to accelerate the development of the Eastern Mediterranean Energy Corridor, providing an alternative source of energy supply from the region to the European Continent and vice versa," they stressed.

They expressed their desire "to continue strengthening our cooperation, through a series of agreements, on the exploration and transportation of natural gas;" and stressed that "we remain convinced that the discovery of hydrocarbon reserves can serve as a catalyst for regional stability and prosperity."

On Afghanistan, they expressed deep concern for the situation in the country and the risks it poses both for itself and the wider region and underlined that Greece, Cyprus and Egypt will remain in coordination and will explore ways to tackle together, as well as with other partners, the pressing challenges faced by the international community, in particular to stabilize the situation in Afghanistan, the fight against terrorism, the migration/refugee crisis and the delivery of humanitarian assistance to people in need.

"In this context, Greece and Cyprus stressed that the evacuation of Afghans at risk due to political persecution remains a priority for the EU and its member states," they added.

The three leaders also said that "common challenges and developments in the Mediterranean and the wider region require a strategic partnership between Egypt and the EU."

"We are committed to furthering EU-Egypt cooperation in key policy areas based on the Joint Communication and the Council Conclusions on a renewed Partnership with the Southern Neighbourhood - A new agenda for the Mediterranean," they noted, adding that convening the EU-Egypt Association Council by the end of this year would be a strong and tangible signal of the increased EU engagement and partnership with Egypt.

Moreover they agreed that "climate change should be a core component of our cooperation agenda and affirmed that we remain strongly committed to the implementation of the UN 2030 agenda for sustainable development. We recognized that the Mediterranean has one of the richest marine and coastal ecosystems in the world, but also one of the most vulnerable. Its rapid degradation requires swift, common and concrete responses, as well as further regional cooperation, involving all relevant actors, in the protection of this shared environment," they said.

The three leaders agreed that the next trilateral Summit shall take place in Egypt, in the second half of 2022.

Cyprus has been divided since 1974 when Turkish troops invaded and occupied the island`s northern third. Numerous rounds of talks under the UN aegis to reunite the island under a federal roof failed to yield results.